Tiffen Cycling Team has been having a successful and rewarding summer of racing and have been enjoying getting out and about in the new distinctive team colours. The team has tallied up a number of great results in both local and interstate racing in recent months. In December the team placed a rider in 5th place overall and also won the sprinters classification at the Tour of Bright in Victoria.

In local racing, Matthew Rizzuto is currently leading the overall Canberra Cycling Summer criterium series for the team. Matthew and Jeremy Ross have both had impressive wins against some big national and international riders in A grade during the series.

In a less competitive nature the team has also had riders take part in both the Bupa Challenge in Adelaide and the Peaks Challenge Cradle Mountain in Tasmania in recent months. These are both excellent rides for those looking for a cycling challenge out of town.

Coming up this year the team will finish up with the summer criteriums and take aim as some of the Victorian Road Series events and many of the great local road races which are on offer in Canberra this year.

In March the team will also take part in Amy’s Big Canberra Bike ride for the first time this year and is looking forward to getting out with many of the thousands of other Canberra cyclists and helping raise awareness to the important issue of cyclist safety. 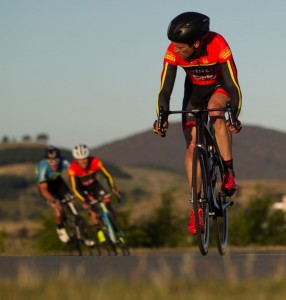